The first mention of carob consumption dates back to the times before Christ. Still, many of us did not deal with this product, and its use in the kitchen is a mystery. What is carob, what are its properties and why is it compared to cocoa? I invite you to the text.

Karob – what is it?
Karob, in other words, carob tree, carob tree, ceratonia (Latin: Ceratonia siliqua L.), is a plant from the legume family (Leguminosae), which most probably comes from the vicinity of Oman. Although carob grows also wild, the main areas of its cultivation are areas of the Mediterranean. The biggest plantations of carob can be proud of Italy and Portugal. Although not yet widely used in Poland, its production in the world is over 300,000 tons per year. One tree spends about 100 to 400 pods per year. The carob tree reaches even 15-18 meters and is characterized by an extensive crown, evergreen leaves and a bulging bark on the trunk. Pods, in turn, are the fruit of the carob tree. They reach about 20-25 cm long and about 2 cm wide, they are brown with shades of purple, and their structure is completely edible. The inedible part is the gray-brown hard grains hidden inside the pods.

It is assumed that the first mention of carob consumption can be found in the Gospel according to Saint Matthew. He describes the meal of John the Baptist, who, while in the Judean Desert, ate only honey and locusts. Although these insects were also food at that time, the evangelist was probably not about locusts, but about the carobes. This explains where the other name for ceratonia comes from. The carob tree is also known as the carob tree, while the pods are just St. John’s bread.

Karob – nutritional value
Carobs contain a large amount of sugars (48 to 56% pulp, about 70% of the plant). Glucose, fructose and sucrose dominate here. It also contains starch and hemicellulose (fraction of dietary fiber). One of the cherished ingredients of carob tree is galactomannose. The protein constitutes 6% of the pulp, whereas in the seed without the cover, its amount is about 60%. Karob is a source of minerals, in particular potassium, calcium and magnesium. It also contains quite often consumed in insufficient amounts of selenium. The plant is a source of polyphenols, which constitute a group of strong antioxidants. A small part in pods takes water, because it is only 15%. An important component included in ceratonia is d-pinitol, the properties of which are described below.

Carob – properties
Thanks to the content of dietary fiber, carob can be recommended for people with elevated cholesterol levels in the blood. This fiber has an action reducing its concentration. The decrease in the so-called bad cholesterol, or LDL, which is considered to be the most elevating risk of cardiovascular disease. Carob fiber also has a positive effect on the digestive tract, improves intestinal peristalsis and protects against constipation. Thanks to the presence of d-pinitole, carob tree affects the carbohydrate metabolism through an analogous effect to insulin. This hormone lowers the level of glucose in the blood. The said compound also contributes to the increased recovery of the spare sugar in the muscles, i.e. glycogen. The good news for physically active people, but not only, will be the stimulation of creatine transport through d-pinitol to muscle tissue. Creatine is a compound naturally synthesized in the human body, also supplied with food, whose impact on improving the physical fitness of athletes has been scientifically proven. It is also worth mentioning the taste characteristics of the carob. It is often compared to cocoa – and rightly so, because its taste resembles such a sweet drink or chocolate.

Karob – application
A characteristic feature of carob grains is their very even mass. This property was also used in ancient times by apothecaries and jewelers to determine the weight of various raw materials. Although this application is no longer practiced, it is worth knowing that the term carat is derived from the carob tree seeds. 1 carat corresponds to 0.2 g, ie the weight of carob grain (Greek Keration).

Carob tree is a very grateful plant, which can be used for both grains and fruit. Its structure also yields a dietary fiber whose health benefits are widely understood. Due to the low requirements for environmental conditions, carob was a plant used in crop failure as a food source.

According to the habits of the inhabitants of the Mediterranean basin ground carp is used to prepare the so-called carob cocoa. It is common to use flour milled carob as an addition to hot or cold milk.

The main application of carob in the food industry is the production of rubber and resin. Carob gum is obtained from galactomannan, which has strong thickening properties. In the industry, it is marked with the symbol E410. Is used, among others in ice cream and sauces.

Karob is an ingredient in various types of products, including cereal flakes, chocolate bars, chocolate-like products, and even infusions and teas. The high content of sugars in the locust allows for the extraction of special juice from its fruit, which is called a caftan. This in turn is a component of syrups used in fruit preserves, as well as in the production of beverages with the addition of alcohol such as liqueurs and wines.

People who do not drink traditional coffee may be interested in its substitute, which is obtained from roasted and ground carob bean. Carob pulp is used to produce flours used in diabetic products. Karob is gluten-free, so it can also be used by people on a diet deprived of this protein. However, it is important to inform the manufacturer that the product is free from contamination with gluten crops and gluten itself.

Carob fiber is also used in baking. It has an impact both on improving the texture of the dough, as well as increasing the taste and giving a pleasant aroma to bakery products. Thanks to the water-binding properties, the bread with the addition of carob longer maintains softness, moisture and storage stability. Molasses is also obtained from the carob, which is a sweetener for use as a sugar substitute.

Due to the nutritional value of carob and the profitability of crops, the desire to use it also as a feed for farm animals and a substrate for the production of bioethanol increases. Other industries that use carob properties are cosmetics or textiles. Carobs, paints and paper also benefit from carob tree.

In turn, pharmaceutical companies can use carob in the production of antitussives such as syrups, gentle antidiarrheal medications, as well as alleviate inflammatory conditions of the intestines and stomach.

Carob and cocoa – differences and similarities
Karob is similar to traditional cocoa. However, it is distinguished by its delicate, sweet taste, which cocoa beans are missing. It is appreciated as a replacement for cocoa in chocolate-like products mainly due to the hypoallergenic character. Unfortunately, cocoa is quite a frequent and strong allergen. Carob tree also contains less fat than cocoa, which is certainly desirable in the group of slimming people. Unlike cocoa, carob is devoid of caffeine. Cocoa also contains, among others theobromine, which together with caffeine as a substance with psychoactive activity can stimulate, improve concentration, but also well-being. Both products contain a lot of substances with antioxidant activity. Carob and cocoa also have a beneficial effect in the prevention of cardiovascular diseases. They have a good effect on the lipid profile, because they lower, among others, LDL cholesterol fraction. 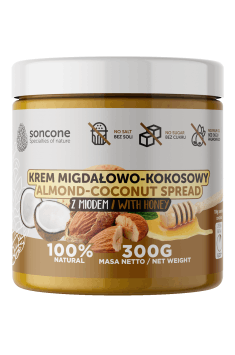 Although karob is not widely spread in Poland, it is worth considering its use in the menu. Considering its taste, health properties, as well as the beneficial effect on the texture and organoleptic qualities of bakery and confectionery products, we may be inclined to say that it has many pluses. In addition, if we do not believe, the price for the packaging is relatively low. One can therefore try to buy it in order to make a subjective assessment of the product. And although I absolutely do not urge you to give up cocoa altogether, it would be highly advisable to vary the diet in the carob tree. Maybe today, instead of traditional cocoa, try a similar carob-based drink?