Do you have the last (bigger than usual) appetite for sweets? This may be a symptom of chromium deficiency. The mineral is also regarded as a natural ingredient supporting the slimming process – but it is not the only properties of this mineral ingredient, so we will take a closer look at its properties.

In commonly available sources of information one can find such statements that chromium helps to suppress excessive craving for sweets and hunger pangs. According to some descriptions, it also affects the rate of fat burning. Chrome has been known since 1797, but in the last 20 years it has been a career in the element supporting weight loss. The name of the mineral derives from the Greek word chroma meaning color. In the oxidation process, chromium forms various compounds of various colors. Today we already know that this metal has an important biological function and as one of the trace elements is needed for the proper functioning of the body.

Chromium is a microelement that performs various functions in the body. One of the fields of action of this mineral is the metabolism of glucose and fats. Chromium reduces the need of the body for insulin, therefore it is considered as an element that can effectively suppress the appetite for sweets. In the end, the desire for something sweet and wolf appetite occurs when there is a sudden discharge of insulin into the bloodstream and an equally rapid drop in blood glucose. Chromium also has an effect on cholesterol – the bad and the good. Proper supply of this mineral in the diet helps lower the level of bad cholesterol (LDL) while increasing HDL cholesterol. A diet rich in chromium thus favors maintaining a proper lipid profile. Chromium deficiency is one of the factors conducive to heart disease and atherosclerosis and diabetes. The participation of this element in metabolism is also related to the participation in the transformation of carbohydrates, proteins and fats.

Most consumers asked about chromium will probably answer that it is a component of supplements that accelerate or support the slimming process. Meanwhile, few people can point to natural sources of chromium. The body does not need this element in large quantities – after all, it is a trace element. We will not find too much in food products. The most valuable sources of chromium are wholegrain cereals, seafood and fish as well as yeast and Brazil nuts. Among products of animal origin rich in chromium, eggs and beef as well as poultry meat are mentioned in the first place. Of the fruits, apples are the most abundant in this element. Relatively large amounts of chromium can also be found in wheat germ and green vegetables, which it gives color – in artichokes, broccoli, lettuce, green peas and asparagus.

The problem of chromium deficiency appeared in the twentieth century

Probably a problem with chromium deficiency appeared in the twentieth century – when there appeared highly processed products that dominated the menu. They do not contain chromium or contain this element in very small quantities. Meanwhile, the daily requirement of an adult human is about 25 to 35 μg (micro gram) of chromium per day. What is worse, the demand for chromium increases under the influence of such factors as

– physical effort related to the performance of work

Opponents of dietary supplements believe that a properly composed menu will be sufficient to cover the demand for chromium. Supporters (read producers, sellers) encourage to prevent chromium deficiency by taking dietary supplements. Both are right. In practice, few people eat in such a way as to cover the demand for chromium and other elements. What’s more, the symptoms of chromium deficiency are so unspecific, that the patient rarely associates them with a reduced level in the body of this element. 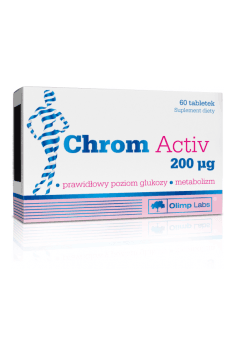 When the chrome runs out

Among the symptoms of chromium deficiency one can mention, among others, such ailments as

Less common symptoms include nausea, increased cholesterol and blood sugar, and lower mood. These are the consequences of long-term chromium deficiency. Interestingly, many patients also have an increased willingness to consume not only sweets but also alcohol, which may be related to the role of chromium in the metabolism.

Excess chromium is more dangerous than a deficiency

Proponents of chromium supplementation encourage its use prophylactically also as a supplement to a balanced diet – after all, if the diet is balanced, then nothing should be missing from the body. Therefore, the claims of supporters of supplements must be approached with a certain distance and above all with common sense. If the body receives a portion of chromium in the form of food and an additional portion of chromium in the form of a dietary supplement each day, after a certain period of time a dangerous increase in the level of this element may occur.

These cases are rare, because most dietary supplements contain safe amounts of chromium and are not absorbed completely in the gastrointestinal tract – its bioavailability and dose are lower than in the case of anti-chromium drugs. However, taking the preparation (even the over-the-counter) according to the rules contrary to the manufacturer’s instructions may cause damage to the body in a few weeks, and more specifically to DNA. Persistent excess of chromium in the body may also lead to an increased risk of cancer development.

Chromium deficiency affects carbohydrates metabolism, but the excess of this mineral also has a negative effect – it disturbs the production of insulin responsible for delivering sugar to the cells. The excess of chromium in the digestive tract makes it difficult to absorb zinc and iron. If you are taking dietary supplements containing chromium, control the level of these elements in the body, so that one of the health problems does not get two – anemia due to iron deficiency and zinc deficiency.

Chrome for a slim figure

The slimming effect of chromium is only an indirect result of maintaining the proper level of this element in the body. Absolutely incompatible with the current state of knowledge are the claims that chromium was to accelerate the rate of weight loss, or more accurately, the burning of body fat. Such theses are disseminated and build the mistaken belief among consumers that the more chromium in the body, the faster weight loss.

The real influence of chromium on getting and maintaining a slim figure is related to metabolism. Taking care of the proper level of this element, we reduce the risk of hunger attacks, because the level of sugar is stable. However, rapid spikes of glucose in the blood can occur even in people who do not struggle with chromium deficiency. Dietary supplements containing chromium do not guarantee anything – meanwhile, consumers expect a reduction in the appetite for sweets.

There are not many people who can refuse something sweet. In some patients chromium is responsible for the excessive appetite for sweets. For most people who have a problem with excessive appetite for sweets, however, there are unhealthy eating habits that have been cultivated for years or stress. Chromium supplementation alone is not enough to get rid of excess kilos – only the right diet and physical activity can work wonders.

You can read also: Vitamins for her and for him – does it matter?