As shown by numerous studies, extremely beneficial for humans in the prevention of many diseases and diseases and their treatment, is gamma-linolenic acid, or GLA, belonging to polyunsaturated fatty acids from the omega-6 group and among this group is considered the most valuable.

GLA, also designated as acid 183 (18 carbon atoms joined by three double bonds). This underestimated fatty acid is a precursor of PGE type 1 prostaglandin, a very valuable substance playing the role of a regulator of many important physiological processes, having anti-inflammatory activity, also responsible for the proper condition of the skin.

What is GLA acid?

Among the essential unsaturated fatty acids (formerly known as vitamin F), there is a distinction between omega-6 – linoleic acid (LA) and omega-3 alpha-linolenic acid (ALA). GLA is the second in a series of omega-6 acids and theoretically it is not an essential fatty acid – the body should produce it with linoleic acid, but it is considered a conditionally essential acid. This indispensability occurs when the enzyme delta-6-desaturase decreases in the body. During the transformation of fatty acids in the body arise eicosanoids, which are lipid compounds acting as tissue hormones. They occur in the tissues and in body fluids. Linoleic acid is converted into GLA by the already mentioned enzyme designated D-6-D (delta-6-desaturase).

The enzyme converting LA into GLA is found in the human body only in small amounts. Its effectiveness is reduced by various factors. They can even lead to complete inhibition of enzyme activity. The risk of GLA deficiency in the body is therefore very high. The main factors causing the attenuation of the effectiveness of D-6-D are included

– stress and elevation of glucocorticoids

– the aging process of the body

It seems that for the reasons described above, most consumers should use dietary supplements to prevent GLA deficiency, i.e. gamma-linolenic acid. GLA acid belongs to the basic ingredients of the skin. He co-creates phospholipids that build cell membranes like building blocks. Because of these structures, nutrients are transported, so GLA has some effect on the nutrition of skin cells. Gamma-linolenic acid can also be found in ceramides – organic chemical compounds from the group of lipids present in the stratum corneum. In this regard, GLA is responsible for protecting the skin against external factors, e.g. cold, wind, etc.

Gamma-linolenic acid, improving the microcirculation of blood in the skin, ensures its better nutrition and oxygenation. It also removes toxins that contribute to skin changes and that look healthy on the skin. Due to the enormous importance of GLA for the skin, it is recommended to use external preparations containing this ingredient. Dermocosmetics that penetrate deep skin layers are particularly recommended by dermatologists. It is transformed into prostaglandins, thanks to which it protects the skin against the action of infection and inhibits the development of allergies and eliminates inflammation, preventing, among others, too rapid skin aging.

GLA in the form of an oral preparation

The other next to dermocosmetics using GLA supplementation is the use of capsules, or oral preparations. In this way, treatment of diseases caused by type 1 prostaglandin deficits can be supported.

Uncontrolled supplementation with omega-6 acids may lead to an increase in the level of unfavorable arachidonic acid in the body, and consequently to the production of unfavorable, pro-inflammatory prostaglandins type 2. On the other hand, a suitable combination in the omega-3 diet, i.e. alpha-linolenic acid (LA), or eicosapentaenoic acid (EPA) and docosahexaenoic acid (DHA) with GLA acid inhibits conversion of DGLA to arachidonic acid (AA), and consequently the production of proinflammatory prostaglandins type 2, prevents inflammation and thrombosis in the body. Supplementation with selected acids is also crucial for people who consume large amounts of protein with large amounts of fat. Clinical trials suggest that taking GLA at a dose of up to 3g per day is well tolerated. GLA supplement together with omega-3 acids should be given together with food to avoid possible adverse reactions on the gastrointestinal tract. 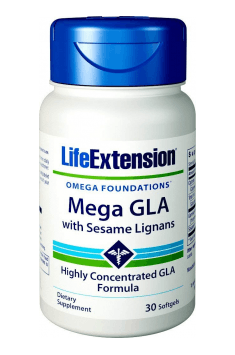 The skin is severely affected by GLA deficiency

The GLA deficiency in the skin leads to a significant acceleration of aging processes. When cells lack gamma-linolenic acid, there is increased transepidermal water loss – skin barriers lose their tightness. For the skin it means dryness, roughness, faster appearance of wrinkles and reduced elasticity. No cosmetics can help here – except those from GLA. The use of preparations containing this component is scientifically justified. The skin can not produce the D-6-D enzyme itself, and therefore it is not possible to produce GLA from LA. GLA production processes occur only in the liver.

GLA versus chronic diseases and diseases

Researchers are of the opinion that it is very important to maintain an appropriate balance between omega-6 and omega-3. It should be> 51. In the diet of the average European and American, the ratio of omega 6 to omega 3 is usually in the range of 111 to 301. GLA plays a special role (although it is omega-6) in the prevention of cancer, because it has the highest selective cytotoxicity exclusively for cancer cells .

Gamma-linolenic acid inhibits urokinase activity and increases the expression of the suppressor gene nm-23. Thanks to this, the cancer is less invasive – the risk of metastases decreases. There have even been studies involving GLA infusion directly into the tumor or in the area of ​​cancer. The results of the research leave no doubt – GLA inhibited the formation of new blood vessels of the tumor, which in practice means better prognosis and longer survival. The best results were obtained in cases of liver cancer, bone and brain as well as pancreatic and breast cancer. Cancer is just one of many examples of GLA in the treatment of chronic conditions. Supplements supplementing the level of gamma-linolenic acid (preferably in combination with omega-3 acids) are also recommended in the course of asthma (patients with asthma should be supplemented with GLA and EPA to lower the level of leukotrienes), allergies, diabetes, rheumatoid arthritis, osteoporosis, hypertension, heart disease, gastric and duodenal ulcers. The beneficial effects of GLA have also been observed in premenstrual states, fibrotic cystic fibrosis, menopause and attention deficit hyperactivity disorder. The next group of diseases in which GLA helps are atopic dermatitis

(in patients suffering from this disease, LA to GLA conversion is inhibited), seborrhoeic pimples, and acne. GLA also helps in combating irritation and people struggling with brittleness of hair and nails and in Reynaud’s team.

GLA not only in capsules

GLA supplementation usually involves the use of capsules filled with an oily substance. However, this is not the only way to deliver gamma-linolenic acid to the body. For example, bio-oils, i.e. oils of vegetable origin, cold-pressed, can be selected. They have found application in medicine and cosmetics. Cold pressed biools, high polyunsaturated fatty acids, including GLA, are obtained, inter alia, from borage seeds (contain approx. 18-25 g / 100 g of fatty acids), from two-year-old and one-year evening primrose seeds (about 8-12% ), from black currant seed (about 20%), gooseberry (12%), viper (11%, it also contains valuable stearic acid (SDA)), forget-me-not (20%), hemp (6%). The valuable source of gamma-linolenic acid is spirulina, which contains up to 30% of GLA. GLA in small amounts occurs in some fungi.

You can read also: Fat burners – support in reduction