The name citrulina comes from the Latin name citrullus, which in translation means … watermelon. Citruline is rarely spoken of as an amino acid, hence the knowledge of the average consumer about it is relatively limited. It has no protein building function (it is an endogenous amino acid, that is, the body can synthesize it itself), but it has a number of important functions in the body.

The composition of dietary supplements mainly include l-citrulline malate and citrulline. The first form is a combination of the amino acid and malic acid. It is very soluble in water and has relatively high chemical stability.

Here you can find supplements supporting your workout – CLICK

Citruline – the precursor of arginine

Citrulline is an amino acid used by the body to produce arginine. Arginine, in turn, supporting the production of nitric oxide, leads to the expansion of blood vessels and increases blood flow to the muscles. Supplementation of citrulline, instead of arginine, is justified – citrulline finally leads to a greater saturation in the body with arginine than direct supplementation with arginine, because when introduced into the body, it converts in the kidneys increasing its plasma level for a longer period of time. Arginine supplementation, in contrast to citrulline, can also cause so-called Oxidative stress.

Citrulline malate contains an apple molecule. Malic acid is involved in the energy production process called the tricarboxylic cycle. As a result, the use of the supplement will have the same benefits as for l-citrulline, but will additionally lead to an increase in energy levels. Citrulline malate is still a little explored component and although the studies are very promising, you should be careful about its use, not exceeding the doses recommended by the producer on the leaflet.

Supplement not for everyone

At the same time, however, it must be remembered that due to the increase in the level of nitric oxide there is a strong dilation of the blood vessels, leading to a decrease in blood pressure. As a consequence, people who take medications for hypertension or other heart conditions should consult their attending physician before supplementing with citrulline malate or even citrulline itself. Citrulline-containing supplements have a similar effect to those that contain citrulline malate. Both components may interact in dangerous reactions with medicines used to treat hypertension. If the drugs for hypertension already contain citrulline, additional supplementation may lead to overdose.

Citrulline may be included in other medicines, for example impotence, sickle-cell anemia and many other conditions. Therefore, the very fact of using pharmacotherapy requires consulting a doctor. 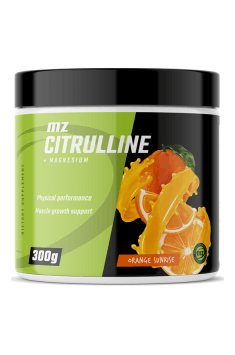 Sources of citrulline in food

The natural source of l-citrulline are all the watermelon color varieties, with the highest concentration in the yellow watermelon (3.5 mg / 1 g of watermelon). The most popular red variation is about 1 mg / 1 g. Citruline can also be found in cucumber (0.15 mg / 1 g), pumpkin, melon, cucurbit, exotic kiwano, cocoa beans, chocolate (especially in raw chocolate – raw and dark chocolate), liver, almonds, walnuts, peanuts, onions, garlic, chickpeas and salmon.

Citruline – the guard of correct pressure

Currently, her role in the diet is reduced to the function of a supplement that improves the process of muscle regeneration and building (in a large generalization). To get the effects mentioned by supplement manufacturers and scientists, you need to use a concentrated dose of citrulline or citrulline malate to further soothe sour. The doses of l-citrulline contained in the diet are much smaller, but thanks to it more safe.

In the body, l-citrulline performs slightly different functions limited mainly to the production of arginine, which then leads to the increase of nitric oxide in the blood. A healthy diet based on vegetables and fruits rich in l-citrulline, helps to keep blood pressure in check. L-citrulline as a precursor to arginine protects normal blood pressure. Therefore, for the sake of cardiovascular health, it is worth remembering. A deficiency of citrulline promotes hypertension and may be manifested by muscle weakness.

You can read also: Citrulline – improvement of the muscle pump

Alpha lipoic acid, otherwise known as alpha-lipoic acid (ALA). Humans have the ability to produce lipoic acid. At the beginning of research on luteic acid it was thought that it is a vitamin and should be delivered to the body.

Antioxidant activity – alpha lipoic acid has the ability to scavenge free radicals from the body, which contribute to the formation of infections and diseases in the body.

Treatment of diabetes – the treatment of diabetic nauropathy is possible thanks to the regular administration of lipoic acid to the patient. Tissues become more sensitive to insulin, and therefore slowly eliminate the disease.

Acceleration of metabolism – alpha lipoic acid significantly reduces the level of glucose in the blood, thanks to which we do not feel so much the desire to eat.

It slows down the aging process – if alpha lipoic acid is present in our muscles and organs in larger quantities, it has the ability to absorb the remaining antioxidants.

Oxygenation of cells – alpha lipoic acid accelerates and supports the production of nitric oxide, thanks to which blood flows faster.

Liver protection – alpha lipoic acid increases the level of l-cysteine, thanks to which our liver is protected. It also affects the detoxification of the liver.

Alpha lipoic acid – dosage
The dosage of alpha lipoic acid depends on several factors. Other values ​​will be taken by a person suffering from diabetes and another person practicing sport professionally. Therefore, the intake and dosage of lipoic acid should be consulted with your doctor.

Taking excessive amounts of alpha lipoic acid can cause abdominal pain, diarrhea or nausea. When it comes to pregnant and breastfeeding women, its supplementation is not recommended, as research on alpha-lipoic acid is not yet sufficient.
Alpha Lipoic Acid – Prevalence and Price

Alpha lipoic acid is naturally found in food. The most can be found in: spinach and broccoli,

MTHFR gene mutation – it may increase the level of homocysteine and cause atherosclerotic changes.

In normal conditions, this gene is responsible for maintaining proper concentration of homocysteine in blood plasma. Its damage, however, causes the reverse effect.

Excessive level of homocysteine damages veins, due to which they are more prone to the development of atherosclerosis or thromboembolism.

It also causes that folic acid is badly absorbed by the organism and homocysteine cannot be converted to methionine. Folic acid deficiency is one of the main causes of hyperhomocysteinemia.

Excessive level of homocysteine damages veins, due to which they are more prone to the development of atherosclerosis or thromboembolism. Its high concentration may be decreased by providing the organism with a proper dose of folic acid, vitamin B6 and vitamin B12. Their presence allows to maintain homocysteine level on a proper level.

The amount of homocysteine in the blood plasma should not exceed 7 – 10 mol/l. It is a safe concentration for our organism. 15 mol/l is also treated as a normal range. However, increased level of homocysteine, between 11 – 13 mol/l, may already damage endothelial cells covering blood vessels. Hyperhomocysteinemia is diagnosed when its value reaches 20-30 mol/l.

Applying large doses of folic acid to people with MTHFR gene mutation will not treat hyperhomocysteinemia. Quite the contrary, it may do more harm than good. Due to the fact that the organism of a patient is not able to process and absorb folic acid by itself, it needs to be provided in a methylated form. However, in order for a physician to prescribe such a “special” kind of folic acid, they first need to know if we really have a damaged gene. This question may only be answered by genetic tests.

Atherosclerosis is a diseases, which entails complete or partial obstruction of the lumen of blood vessels by atherosclerotic plaque made of cholesterol. Cholesterol, produced in the liver, is responsible for many functions in the organism, including the production of hormones and digestion. We may distinguish two basic kinds: high-density lipoproteins (HDL), the so-called “good” cholesterol and low-density lipoproteins, colloquially called “bad” cholesterol. There is also the so-called total cholesterol which constitute the sum of all types (fractions) of cholesterol. It is also worth knowing that we provide cholesterol with food. This is why, excessively high level of “bad” cholesterol is often the effect of improper, fat diet. Blood has no possibility to flow freely through an obstructed vessel. Blood provides cells of the human organism in oxygen and nutritious substances, therefore its proper circulation in blood is essential for life. Blood ensures our internal organs proper oxygenation and nourishment. Due to this, advanced atherosclerosis may lead to heart attack, stroke, coronary heart disease or lower limb disorders.

We may counteract atherosclerosis

Atherosclerosis prophylaxis is based primarily on proper diet. We should eliminate the main sources of cholesterol from our menu, such as fat cheese, red meat and sweets. Instead, we should provide the organism with proper doses of folic acid. We will find it in cabbage, lettuce, Brussels sprout, broccoli, bean, pea, oranges and bananas. Folic acid decreases homocysteine level in blood, thanks to which it will not damage blood vessels any more.