According to the Old Germanic legend, when bears awake from a winter sleep, they reach for a plant that perfectly cleanses their body – we’re talking about bear’s garlic. We should also use its properties from time to time.

Bear garlic is a plant that resembles a lily of the valley. These plants have very similar leaves and small, white flowers. The distinctive feature of these species is of course a specific smell. Lily of the valley smells much nicer, but there is no such rich nutritional composition as bear garlic.

Interestingly, bear’s garlic has, apart from its own, specific properties, also those that are characteristic of common garlic. However, it contains much more sulfur compounds. These substances have a very beneficial effect on the cardiovascular system and in general on the digestive system. They also help in the fight against Candida albicans bacteria, viruses and yeast. Bear garlic has common properties with only common and partly name. It does not look like it at all, it does not have a head shape divided into teeth. The edible part of bear’s garlic are leaves.

Bear garlic (Latin: Allium ursinum) also occurs under two very graceful names, such as witch onion and gypsy garlic. Valuable properties of bear’s garlic were learned a long time ago – already in late antiquity Germanie used it as a medicine. However, the fact that bear’s garlic has anti-cancer properties has been proven quite recently. Sulfur compounds protect against free radicals and have a beneficial effect on the immune system, which, when strengthened, resists cancer cells better.

Garlic bears good for the heart

Sulfur compounds and other natural substances contained in bear garlic also have a positive effect on HDL cholesterol in the body relative to LDL. In the simplest terms, the level of good cholesterol increases, and bad cholesterol decreases. Added to this is the lowering of triglyceride levels. By the way, lipid profile is improved, which means less risk of developing atherosclerosis, heart attack, stroke and coronary heart disease. Bear’s garlic affects the circulatory system also in the area of ​​blood clotting. It contains a high dose of adenosine, which reduces blood viscosity and leads to vasodilation. As a result, the risk of hypertension and blood clots is much lower. We complain a lot about the lack of iron in the diet – bear’s garlic will help to make up its deficit, although it is known that it is a non-heme iron, which is less absorbable than the heme iron from animal products.

Where is the witch’s onion growing?

Bear’s garlic belongs to the common plant species. It occurs in the forests that cover Europe and some parts of Asia. We will also meet him in Poland – the shoots of bear garlic are already at the turn of March and April, mainly in the Bieszczady Mountains, near Sandomierz, in the Kampinos and Białowieża Primeval Forests. You will recognize it on long lanceolate leaves and spherical, white inflorescences emitting an intense, garlic scent.

Do not eat white flowers!

White flowers decorating bear’s garlic are not edible. They contain toxic substances that could harm our body. To take advantage of the beneficial properties of this plant, drink juice – you can get it in good health food stores and some pharmacies. 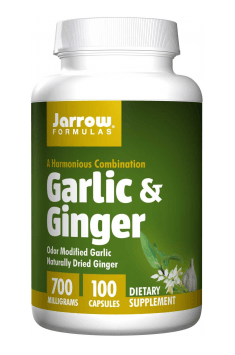 Juice for cold and detox

The most popular form of benefiting from the beneficial properties of bear garlic is the juice obtained from the leaves of this plant. Locked in a dark, glass bottle should be stored in a cool, dark place. Then he will keep his healing properties. Witch onion juice can be consumed daily, prophylactically against cardiovascular diseases and cancer. It can also be used as a way to detox – for example after spring (taking an example from bears).

The third recommended use of bear garlic juice is the treatment of colds and other respiratory infections. In bear garlic there are volatile substances – phenolic acids, thinning the secretion in the bronchi. In addition, the sulfur compounds contained in it (eg alliin and methine) act as a natural antibiotic. The juice of garlic bears helps the body fight the infection without disturbing the balance of the bacterial flora. This organic specialty helps the body mobilize to fight infection also by stimulating the production of immunoglobulins.

Bear garlic juice also helps people who have been diagnosed with Candida albicans. It can also be used in the fight against parasites of the digestive system, such as tapeworms, pinworms and roundworms.

You can drink this juice before a meal

Bear garlic juice leads to increased production and secretion of bile. It also leads to improved intestinal function, which will benefit people with a tendency to flatulence. However, it is not indicated in people who are struggling with stomach ulcers or duodenal ulcers. Interestingly, at least for some of the mammals it is a poisonous plant – dogs are very sensitive to poisoning this plant.

Bear garlic juice has very strong detoxifying properties, which is due to the high content of sulfur compounds. They mainly affect the liver – they act as a cleansing filter, which is neither horrible nor heavy metals nor nicotine. Sulfur compounds, or more precisely the rest of sulfuric acid, also have a neutralizing effect on other toxins present in the human body.

Gypsy garlic and keratin and collagen

The juice of Gypsy garlic contains the already mentioned sulfur, which in turn is the basic mineral that co-creates the connective tissue, collagen and keratin. This means that beneficial properties of garlic bear juice should be used by people struggling with rheumatism (or wanting to prevent it), as well as people who want to take care of strong hair and nails.

It does not delight with its taste, but when it comes to health, it is worth compromising. By introducing it to the diet, you support the body in many ways. Unfortunately, still too few consumers know its beneficial properties, and even fewer decide to use it. Before self-collecting the wild growing bear’s garlic, we observe – it is a partially protected plant and, additionally, it is easily confused with lily of the valley, whose leaves are poisonous. We recommend the establishment of potted bear crops. You can prepare flavored olive oil, healthy pesto, or just a spice for better digestion.

Onions have been appreciated for centuries because of their healing properties, the onion is rich in bactericidal substances and vitamin C, which makes it good for colds and improves immunity.” In addition, the onion has been used as a remedy for hangovers, ulcers and scars (including stretch marks) Check what properties the onion has.

Onions is a vegetable whose medicinal properties have been known for centuries.In folk medicine, a decoction of onions was recommended in rheumatic diseases, syrup from colds, and sniffing of raw onion disinfected his nose and respiratory tracts. For centuries, onions were one of the most valuable anticorrhoid drugs , or sharp deficiencies of vitamin C. They were taken by seafarers, merchants, whalers on long distances, and although onion is not one of the richest sources of this vitamin, its availability and effectiveness made it a permanent provision for expeditions. bactericidal substances that can destroy bacteria that are resistant to antibiotics, as well as phosphorus, magnesium, sulfur, zinc and silicon, so minerals that strengthen the body’s overall immunity to various infections and diseases, but onion is not only a proven way to infection.

Onions can reduce the risk of developing cancer

In people who regularly consume onions (as well as garlic), the risk of developing some cancers is lower than in people who do not like these vegetables,” say researchers from Italy and Switzerland, for example, consuming at least seven portions of onions a week. it has reduced the risk of colorectal cancer by more than 50% (compared to people who do not eat garlic and onions.) In addition, both garlic and onion also reduced the risk of developing cancer of the mouth, throat, kidneys and ovaries.

This is confirmed by scientists from the University of Hawaii and the University of California in collaboration with researchers from Germany who argue that quercetin, a compound rich in onions, can prevent the development of pancreatic cancer.

From the rich list of valuable properties of onions, it is also worth mentioning its blood-thinning and anti-thrombotic effects.” In addition, onions, thanks to their high potassium content (146 mg / 100g), may help lower blood pressure. every day, one raw onion minimum for two months causes the growth of  “good ” cholesterol – HLD, and the reduction of  “bad ” – LDL.

It will be useful to you

Nutritional values ​​of raw onions (in 100 g).How many calories does onion have?

Onion for digestion and constipation

Raw or stewed on water, it improves digestion, prevents constipation and is not recommended for people suffering from acute liver or gall bladder problems.

Eating a portion of this vegetable for a few days is especially recommended after antibiotic treatment, because the onion has fungicidal action.To prepare it, just pour water on the chopped onion and slowly stew. Seasoned with salt, pepper, tastes great, especially when we add 2 tablespoons of oil and we’ll put in an egg.

Onions – contraindications.Who should not eat onions?

Onions should give up people struggling with severe kidney and liver diseases, intestinal inflammation, as well as other diseases of the digestive system.Also people suffering from heart failure should exclude it from their diet.In addition, too many onions in the diet may help to increase the symptoms of heartburn in people who suffer from this condition. ”

Onion soup is a proven hangover method because it perfectly improves the functioning of alcohol-stressed liver.

The vegetable hormone (glucokinin) contained in the onion prevents the onset and development of diabetes in people at risk. In addition, raw onion reduces blood sugar and reduces the dose of insulin, so diabetics can reach for it without any fear.

It will be useful to you

Onions after a bee and a mosquito bite

Contemporary phytotherapy recommends applying an onion slice for 10-15 minutes.in the place after the bite of a wasp, bee or mosquito.Onions, thanks to bactericidal, disinfecting and anti-inflammatory properties, will alleviate the inflammatory reaction, it will eliminate the feeling of burning and pain.

How to get rid of the smell of onions?

Onion has its characteristic, unpleasant odor, among othersfrom a high content of organic sulfur compounds.To get rid of it, you can sprinkle it with lemon.

Onion for acne and scars (including stretch marks)

Because of its versatile action in folk medicine, it has been used in many diseases, for example, wraps from overcooked onion were used to treat ulcers on the skin, which is still effective today. Simmer for 15-20 minutes, making sure that it does not burn in. Overwhelmed, mix, cool mass put on a sick place and fix the dressing, sometimes the therapy should last for a few days until the ulcer heals. treatment does not become scarred.

Similar poultices can be successfully used for inflammation of varicose veins, periosteum, frostbite, burns, acne, etc. The introduction of such mass rectally heals the hemorrhoids. A bit of onion sprinkled on the cotton swab reduces the tinnitus significantly, so often ailments of many older people In turn, the thin film located between the onion layers is a perfect antiseptic dressing