There is no doubt that the abuse of table sugar and sugared products can quickly lead to problems with health and excessive body weight. For many years, we have been looking for an alternative to popular sucrose, which would have its advantages (sweet taste), and whose consumption would not bring negative consequences.

For some time now, synthetic and natural substances called circulatory sweeteners have been growing in popularity, the most popular of which are aspartame, acesulfame potassium, sodium saccharin, sucralose, and more recently also xylitol and stevia. Unfortunately, more and more often talk about the potential risks associated with their consumption, which according to selected sources can be even greater than those resulting from the use of sugar.

Countless contradictory data often creates a kind of chaos, and in the informational noise it is difficult to make unambiguous conclusions. Therefore, in this article I will try to answer the question about what drinks are best sweetened, and I will also refer to several popular circulating theories regarding the health consequences of using sugar and other sweeteners. 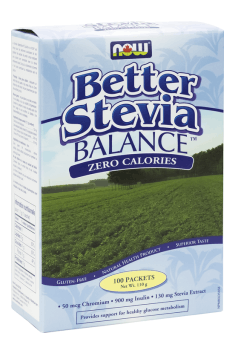 A lot is said about the fact that sugar is needed for us to function properly, it is mentioned that it adds energy, improves brain function etc. Of course, the nervous system requires constant delivery of certain doses of glucose, but it does not mean that it will work better if we will sweeten more. In fact, the daily demand of the brain for glucose can be fully satisfied by eating a solid bowl of oatmeal with fruit for breakfast, and in the next meals without consuming carbohydrates anymore! And if necessary, the body is able to produce an additional portion of sugar from non-sugar sources in a process called gluconeogenesis. The situation is similar in the case of physical effort. A sweet candy bar can give us energy during a long-lasting effort such as running a marathon, and a walk in the park or a half-hour walk are no indication to consume extra carbohydrate doses, especially in refined form!

The fact is that refined sugars hidden under the names such as sucrose, glucose-fructose syrup, as well as glucose itself and – considered to be dietetic – fructose are definitely undesirable components of our diet. Their regular consumption may lead to disturbances in insulin-glucose and lipid metabolism and dysregulation of mechanisms responsible for the control of appetite. As a result, we are more hungry, eat more and more often we feel like low-quality products, and also easier to succumb to culinary temptations. The result is not only the increase in body fat leading to overweight and obesity, but also an increased risk of diseases such as atherosclerosis, diabetes, gout or some forms of cancer!

Stevia and xylitol are low-calorie sweeteners that are an alternative to sugar. Their use is considered better for health and is less controversial than using aspartame, acesulfame-K or other intense sweeteners. Let’s take a closer look at these two probably the safest sweeteners.

Xylitol – sugar is not always birch

Xylitol is a five-carbon sweet polyhydric alcohol (so-called zircon). It is a substance of natural origin with a crystalline structure. It is obtained most often from birch wood or sometimes from maize. In fact, it is possible to obtain it from every plant, because xylitol is formed from xylans, or polysaccharides found in the cell walls of many plants. Xylitol is intended for people who for various reasons can not or should not use sugar, but do not want to give up sweetening. Those who are interested in are certainly weight-loss, athletes, people with diabetes, fungal infections, or people with progressive caries.

The finished product most often looks like crushed sugar and it does not matter what its origin is. Among the leading countries in the production of xylitol definitely mention Finland and China. It has been assumed that xylitol coming from China will have worse quality, because it is used for the production of maize, often genetically modified. Danisco from Finland, whose “XIVIA” raw material is always made of birchwood, enjoys great appreciation. You can find xylitol with different thicknesses of crystals. It may resemble powdered sugar, but it may also look like coarse sugar. Tastes always like sucrose, and the only difference is the coolness in the mouth. It is 100% safe for health and clearly better than traditional sugar.

dryness in the mouth (stimulates the secretion of saliva);

inflammation of the ear;

preventing the accumulation of putrefactive bacteria;

treatment of oral infections with candida;

Stevia owes its sweetness to the presence of glycosides, which are about 30 to 320 times sweeter than sucrose. In the European Union, the sale of steviol glycosides (E960) was authorized in 2011 (Commission Regulation (EU) No 1131/2011 of November 11, 2011). In Paraguay it was already known more than 1000 years ago as a natural sweetener and healing substance. The presented sweetener is an alternative to sucrose and intense sweeteners. Stevia has all the desirable qualities that intense sweeteners have, but, unlike them, it has a vegetable origin. Stevia rebaudiana, from which sweeteners are obtained, has exceptionally sweet leaves. They are subjected to a drying process followed by extraction. The process then purifies the obtained extract using ion-exchange chromatography.At the end of the process, the purified extract undergoes a recrystallisation process. Due to the complexity of the process, the price of stevia is quite high. Sometimes the stevia form intended for sale contains various types of additives such as maltodextrin or glucose for a loose form.

Which sweetener will be the best?

Stevia, compared to xylitol, is much sweeter and has virtually zero calorific value. Xylitol will provide 2.4 kcal for each gram, which means it will need to be included in caloric calculations. Stevia is characterized by a complete lack of influence on the glycemic index of consumed beverages or meals. Xylitol may slightly increase the level of sugar. Both sweeteners are not sensitive to high temperature and are suitable, for example, for baking or cooking. Both sweeteners are safe for diabetics and do not damage teeth. Xylitol and stevia are obtained from plants. Xylitol can only be obtained in a crystalline form, and in cases of stevia the choice is very wide powder, tablets, crystals, liquid, sachets, dried leaves, leaf powder and even fresh leaves. As for the taste,this xylitol will certainly be more similar to the traditionally used sucrose. Stevia’s sweetness is no longer the same as sugar and some will not accept this taste. There is no doubt, however, that it is much healthier than sucrose.

Stevia is a sweetener about 300 times sweeter than sugar, which also has no calories. Therefore, it is very popular, especially because the demand for low-calorie products is still increasing. But is stevia a good alternative to sugar? Is the stevia sweetener safe for health?

Stevia is it safe?

Steviol glycosides were suspected to be carcinogenic and to have a negative impact on fetal development by 2010. In the same year, the European Food Safety Authority (EFSA) concluded that the use of stevia is safe.

As a result, on 11 November 2011, the European Commission officially recognized Stevia as a food additive number E960, with an acceptable daily intake (ADI) of 4 mg per kilogram of body weight, as the European Commission considered that there is a risk of stevia overdose, which is especially high among people who drink a lot of sweetened drinks.

It’s good to know that the daily dose of sweetener can also be exceeded due to cosmetics, which include stevia. The sweetener is also hidden in fertilizers, hence the controversy regarding the launch of this substance.

Stevia can kill the bacteria that cause Lyme disease, specifically the biofilm – protective shield “that these bacteria produce, and a team of scientists led by Professor Eva Sapi from the Department of Biology and Environmental Science, University of New Haven. ¹ However, this action shows stevia in the form of powder (which is found in many homes), but in liquid form and in the form of an extract from stevia leaves.

Stevia in the latter two forms reduced the weight of the biofilm by about 40 percent.” Prof. Sapi and her students compared the liquid stevia extract to antibiotics – doxycycline, cefoperazone, daptomycin and others.

Our results showed that stevia exerts a significant influence on the elimination of B. burgdorferi. Stevia leaf extract showed better results than individual medicines used to treat borreliosis. The results of this study suggest that the natural product, which is stevia leaf extract, can be considered an effective remedy against B. burgdorferi – explains the expert.¹

Stevia is safe for people with phenylketonuria. In addition, studies show the beneficial effect of stevia in hypertension and diabetes.

Can you be relieved by stevia?

Most food additives have a safe daily intake (ADI).For steviol glycosides it is about 11 mg / kg body weight per day.That’s a lot for a person weighing 70 kg, it corresponds to over 215 g, which is about a glass of sugar. Research conducted by the JECFA (Joint Experts Committee on Food Additives) to determine the level of ADI showed that even consumption of 100 times higher doses of steviol glycosides than the daily safe dose does not have a negative impact on health.

Stevia in the kitchen

Fresh Stevia leaves can be an addition to salads, while dried, powdered leaves can be used for tea or coffee, and Stevia can also be a component of fruit preserves and juices.

Stevia is not the best addition to cakes.It does not behave like sugar and turns into caramel, it does not add fragility to cakes, it is not a source of yeast. That’s why some people recommend using xylitol (birch sugar) for baking.

Stevia where to buy?

Stevia can be bought not only from health food stores or some online stores, but is also often available in popular supermarkets. It is available in the form of fresh leaves (eco and internet stores), concentrated extracts in powder or tablets and liquid (also supermarkets.) Sweetener prices range from PLN 15 to 50.

In Poland, stevia can be grown alone – planting it in the middle of May in the garden or grow all year in pots. In autumn, the leaves of stevia are getting sweeter, therefore the harvest is best carried out in the second half of September or the beginning of October.